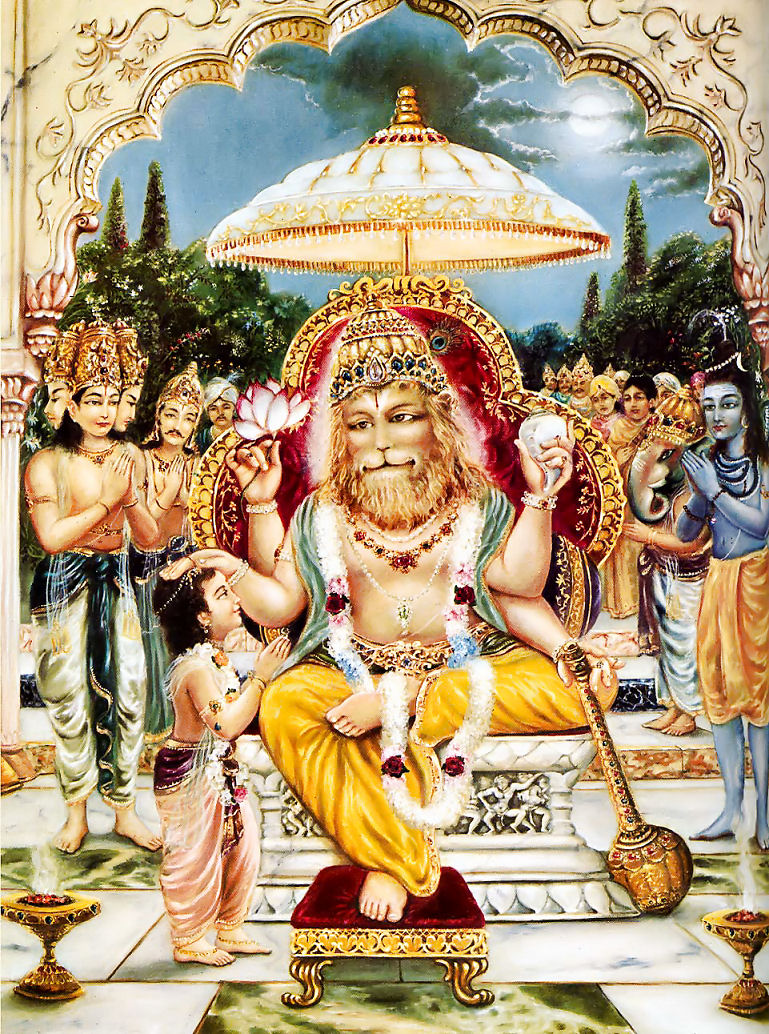 Nrsimha Chaturdasi is the day Lord Nrsimhadeva (nri-SING-ha-deva) appeared on the earth.

After Varahadev killed the demon Hiranyaksha, the demon’s younger brother, Hiranyakashipu, performed severe austerities which made him the most powerful being in the universe. Although Lord Brahma could not grant him immortality, he did give Hiranyakashipu blessings, that he could not be killed by any man or animal, by anything living or dead, during the day or night, inside or outside, on the land or in the sea or sky.

Although seemingly invincible, Hiranyakashipu tormented his youngest son Prahlada in many ways, but because he was a pure devotee of Lord Krishna he was not harmed. Then, the Lord burst out of a palace column as Nrisimhadeva. By killing Hiranyakashipu in the form of a half-man and half-lion, with his fingernails, at dusk, in the threshold of the palace and on his lap, Nrisimhadeva simultaneously respected the blessings given by Brahma and saved His dear devotee Prahlada Maharaja.

Come and offer a candle to Krsna this Kartik! @IskconLeicester is open for darshan and candle offerings from 3-5pm each Sunday of Kartik. Prasadam will also be served in take away containers. We can’t wait to see you all soon!!! #Leicester pic.twitter.com/qcGc6amnWj

Dushera festival today, killing of demon Ravana who stole Lady Sita the wife of Lord Ram. Did you know that before being born as a demon, Ravana was 1 of 2 gate keepers/dvarapalas of Lord Vishnu’s abode Vaikuntha? pic of Lordhips in armour @ISKCON_Manor #REChatUK #TeamRE pic.twitter.com/cZrvfRbtfS

Posters from NHS encouraging safe worship for the upcoming Hindu festivals of Navaratri and Durga Puja. It is vital everyone celebrates safely, and we want to ensure everyone is thinking about how to do so when attending places of worship or celebrating at home. pic.twitter.com/c6nTs05ckQ

Navaratri begins today, celebrating the many forms of the Goddess or Devi Usually nine nights of dancing along to the praises of the Goddess. To many Hindus it is also a celebration of Radha&Krishna. Heres more information #TeachRE #REChatUK #RETeacher hinduismre.co.uk/navratri/ pic.twitter.com/vEDh4wnlA6